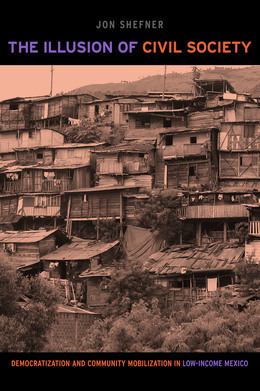 The Illusion of Civil Society

Much has been written about how civil society challenges authoritarian governments and helps lead the way to democratization. These studies show that neoliberal economic policies have harmed many sectors of society, weakening the state and undermining clientelistic relationships that previously provided material benefits to middle- and low-income citizens, who are then motivated to organize coalitions to work for greater social justice and equality. Recognizing this important role played by civil society organizations, Jon Shefner goes further and analyzes the variegated nature of the interests represented in these coalitions, arguing that the differences among civil society actors are at least as important as their similarities in explaining how they function and what success, or lack thereof, they have experienced.

Through an ethnographic examination extending over a decade, Shefner tells the story of how a poor community on the urban fringe of Guadalajara mobilized through an organization called the Unión de Colonos Independientes (UCI) to work for economic improvement with the support of Jesuits inspired by liberation theology. Yet Mexico’s successful formal democratic transition, won with the elections in 2000, was followed by the dissolution of the coalition. Neither political access for the urban poor, nor their material well-being, has increased with democratization. The unity and even the concept of civil society has thus turned out to be an illusion.