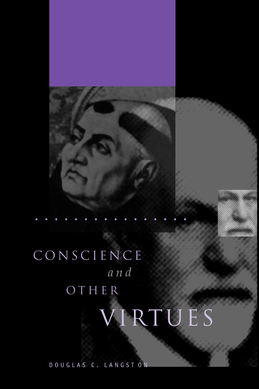 Conscience and Other Virtues

Conscience, once a core concept for ethics, has mostly disappeared from modern moral theory. In this book Douglas Langston traces its intellectual history to account for its neglect while arguing for its still vital importance, if correctly understood.

In medieval times, Langston shows in Part I, the notions of "conscientia" and "synderesis" from which our contemporary concept of conscience derives were closely connected to Greek ideas about the virtues and practical reason, although in Christianized form. As modified by Luther, Butler, and Kant, however, conscience later came to be regarded as a faculty like will and intellect, and when faculty psychology fell into disrepute, so did the role of conscience in moral philosophy.

A view of mature conscience that sees it as relational, with cognitive, emotional, and conative dimensions, can survive the criticisms of conscience as faculty. In Part II, through discussions of Freud, Ryle, and other modern thinkers, Langston proceeds to reconstruct conscience as a viable philosophical concept.

Finally, in Part III, this better grounded concept is connected with the modern revival of virtue ethics, and Langston shows how crucial conscience is to a theory of virtue because it is fundamental to the training of any morally good person.