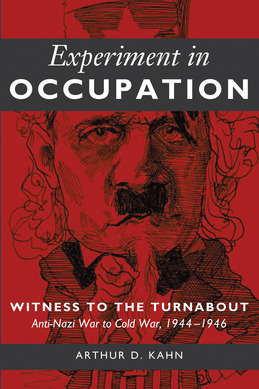 As a participant in many of the events he writes about in Experiment in Occupation, Arthur Kahn offers a richly detailed account of the process by which the fight against Nazism came to be transformed into the Cold War. His story reveals how those in the Military Government of Germany who were dedicated to carrying out the war aims promulgated by Roosevelt and Eisenhower for a thorough democratization of Germany were ultimately defeated in their confrontation with powerful elements in the Military Government and in Washington who were more intent upon launching a preemptive war against the Soviet Union than upon the eradication of Nazism and German militarism.

A twenty-three-year-old OSS operative, Arthur Kahn was assigned after D-Day to a psychological warfare unit, where at first he supervised prisoner-of-war interrogations and then served as an editor of intelligence. Instructed to respond to requests from Supreme Headquarters, he drafted proposals for psychological warfare approaches to critical situations at the front only to discover that a SHAEF directive banned calls to the Germans to revolt.

Subsequently Kahn served in liaison with the Soviets and during the Battle of the Bulge at Montgomery's British headquarters. For several months before and after VE Day he traveled through the American Zone as an intelligence investigator and wrote a report that led to the dismissal of General George S. Patton as Military Governor of Bavaria. Appointed Chief Editor of Intelligence of the Information Control Division, he produced the most influential intelligence weekly in the American Zone. Kahn's portrayal of events in postwar Germany provides warnings for current and future American experiments in foreign occupation.