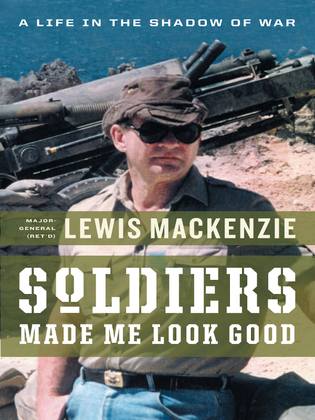 Soldiers Made Me Look Good: A Life in the Shadow of War

by Lewis MacKenzie (Author)
Nonfiction Biography & autobiography Military
Since retiring from the Armed Forces, Major-General Lewis MacKenzie has not stayed out of the spotlight but continues to speak his mind. In this straight-talking memoir, he traces his post-military career as an international commentator on military affairs, a consultant to the Irish government and a federal political candidate.

In Soldiers Made Me Look Good he answers his critics, including journalist Carol Off for her criticism of his handling of the UN mission in Bosnia. In a hard-hitting chapter, he discusses his professional disagreement with the leadership priorities demonstrated by Roméo Dallaire in the early hours of the Rwandan genocide. He continues his story to the present, to “the first real litmus test for NATO”—Afghanistan.

Divided into two parts—pre-1993, when MacKenzie calls himself a Cold War grunt, and post-1993, after his controversial stint in Bosnia—Soldiers Made Me Look Good is laced with anecdotes both funny and profound. It concludes with ten pointers on leadership, in which MacKenzie shares hard-earned insights from a life on the front lines.