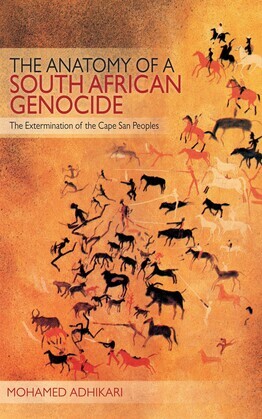 The Anatomy of a South African Genocide

In 1998 David Kruiper, the leader of the ?Khomani San who today live in the Kalahari Desert in South Africa, lamented, ?We have been made into nothing.? His comment applies equally to the fate of all the hunter-gatherer societies of the Cape Colony who were destroyed by the impact of European colonialism. Until relatively recently, the extermination of the Cape San peoples has been treated as little more than a footnote to South African narratives of colonial conquest.

During the eighteenth and nineteenth centuries, Dutch-speaking pastoralists who infiltrated the Cape interior dispossessed its aboriginal inhabitants. In response to indigenous resistance, colonists formed mounted militia units known as commandos with the express purpose of destroying San bands. This ensured the virtual extinction of the Cape San peoples. In The Anatomy of a South African Genocide, Mohamed Adhikari examines the history of the San and persuasively presents the annihilation of Cape San society as genocide.