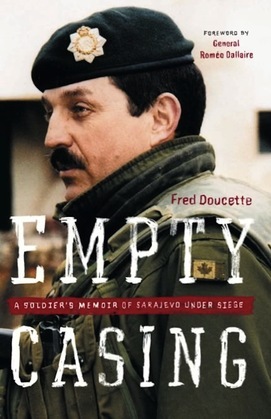 Empty Casing: A Soldier's Memoir of Sarajevo Under Siege

by Fred Doucette (Author)
Nonfiction Biography & autobiography Military
EPUB
Unlimited loans, One at a time
Details
When Canadian soldier Fred Doucette went to Bosnia-Herzegovina as a peacekeeper in 1995, he had a premonition that this tour of duty would be different from anything he had previously experienced. And it was. Doucette's tour quickly became an impossible task that took a huge toll on both the residents and his fellow peacekeepers. Trapped in thier beloved city, thousands of Sarajevans, perished, and yet, Doucette found a home in the midst of this hell. Billeted with a Bosnian family, he was offered a window into a Sarajevo that few outsiders saw. When the war ended, Doucette returned to Canada to face another battle, this one characterized by nightmares and brutal flashbacks. Traumatized, he had to face himself, his family, and his army once again, but now there was no turning away, no diversion in another foreign posting. Empty Casing is the riveting story of the making and unmaking of a soldier, and the growth of a man.