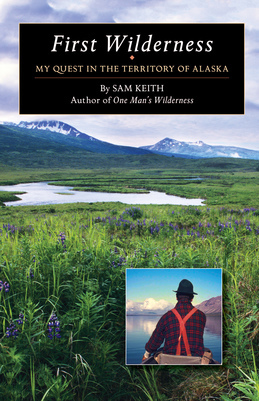 Fans of the Alaskan classic ONE MAN’S WILDERNESS will enjoy reading this memoir of how its author, Sam Keith, and its subject, Dick Proenneke, first met. After serving as a US Marine during World War II and attending college on the GI Bill, Sam Keith decided to seek adventure and acceptance in Alaska. He arrived on Kodiak Island in July, 1952, where he secured a job as a laborer on the Adak Navy base. He befriended a group of like-minded men there, including Dick Proenneke, who shared a love of the outdoors, hard work, and self-reliance. Keith explored the wilds of South Central Alaska while working on the Navy base, and later as a Stream Guard and Enforcement Patrolman. In his hunting and fishing trips with Dick and his friends, Keith found almost everything he sought. But at the end of three years, Keith decided to go Outside to pursue other dreams. Dick Proenneke tells him, “Sam, you know right well you don’t want to leave this country. Don’t give up on it. Me and you got to figure something out.” In 1973, Keith went on to write ONE MAN'S WILDERNESS: AN ALASKAN ODYSSEY, based on his dear friend’s journals and photography. It was reissued in 1999 and won a National Outdoor Book Award (NOBA). In 2003, portions of text from the book and some of Proenneke's 16mm movies were used in Alone in the Wilderness, which began appearing on US public television stations. The documentary follows Proenneke as he builds a log cabin with only hand tools, and includes reflections on wildlife, weather, and the natural scenery he sees around him. Sam Keith passed away in 2003. But in 2013, his son-in-law, children’s book author/illustrator Brian Lies, discovered in an archive box in their garage a book manuscript, originally written in 1974 after the publication of ONE MAN’S WILDERNESS. FIRST WILDERNESS is the story of Keith’s own experiences, at times harrowing, funny, and fascinating. Along with the original manuscript are photos and excerpts from his journals, letters, and notebooks, woven in to create a compelling and poignant memoir of search and discovery.