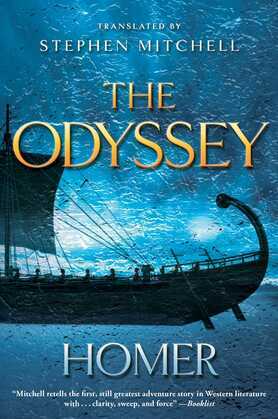 From Stephen Mitchell, the renowned translator whose Iliad was named one of The New Yorker?s Favorite Books of 2011, comes a vivid new translation of the Odyssey, complete with textual notes and an illuminating introductory essay.

The hardcover publication of the Odyssey received glowing reviews: The New York Times praised ?Mitchell?s fresh, elegant diction and the care he lavishes on meter, [which] brought me closer to the transfigurative experience Keats describes on reading Chapman?s Homer?; Booklist, in a starred review, said that ?Mitchell retells the first, still greatest adventure story in Western literature with clarity, sweep, and force?; and John Banville, author of The Sea, called this translation ?a masterpiece.?

The Odyssey is the original hero?s journey, an epic voyage into the unknown, and has inspired other creative work for millennia. With its consummately modern hero, full of guile and wit, always prepared to reinvent himself in order to realize his heart?s desire?to return to his home and family after ten years of war?the Odyssey now speaks to us again across 2,600 years.

In words of great poetic power, this translation brings Odysseus and his adventures to life as never before. Stephen Mitchell?s language keeps the diction close to spoken English, yet its rhythms recreate the oceanic surge of the ancient Greek. Full of imagination and light, beauty and humor, this Odyssey carries you along in a fast stream of action and imagery. Just as Mitchell ?re-energised the Iliad for a new generation? (The Sunday Telegraph), his Odyssey is the noblest, clearest, and most captivating rendition of one of the defining masterpieces of Western literature.