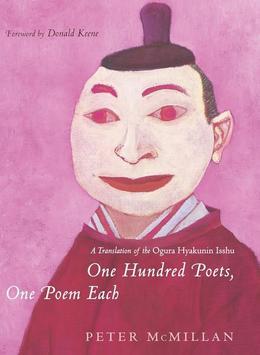 One Hundred Poets, One Poem Each: A Translation of the Ogura Hyakunin Isshu

Compiled in the thirteenth century, the Ogura Hyakunin Isshu is one of Japan's most quoted and illustrated works, as influential to the development of Japanese literary traditions as The Tale of Genji and The Tales of Ise. The text is an anthology of one hundred waka poems, each written by a different poet from the seventh century to the middle of the thirteenth, which is when Fujiwara no Teika, a renowned poet and scholar, assembled and edited the collection. The book features poems by high-ranking court officials and members of the imperial family, and each is composed in the waka form of five lines with five syllables in the first and third lines and seven syllables in the second, fourth, and fifth ( waka is a precursor of haiku). Despite their similarity in composition, these poems evoke a wide range of emotions and imagery, and touch on themes as varied as frost settling on a bridge of magpie wings to the continuity of the imperial line.

Though the Ogura Hyakunin Isshu has been translated into English before, many scholars and other translators have struggled with the formality of the original text, often padding lines in order to conform to the original syllabic model or rearranging the poems to create unnecessary rhyme. In this bold new translation, Peter McMillan uses only the words that are necessary to evoke the original sensations these poems once gave their readers. The poems are accompanied by calligraphic versions in Japanese and line drawings of the individual poets. Explanatory notes place the poems in context, and an appendix includes both the poems' Japanese typed and romanized versions. The Ogura Hyakunin Isshu is an excellent introduction to Japan and its special lyric tradition.