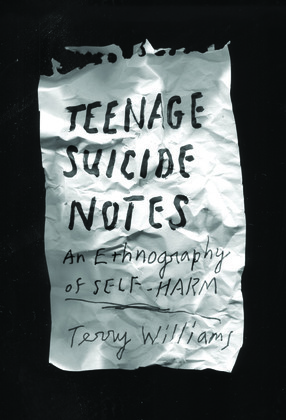 by Terry Williams (Author)
Non-Fiction Social science Sociology
EPUB
unlimited loans, One at a time
Details
“Picturing myself dying in a way I choose myself seems so comforting, healing and heroic. I’d look at my wrists, watch the blood seeping, and be a spectator in my last act of self-determination. By having lost all my self-respect it seems like the last pride I own, determining the time I die.”
-Kyra V., seventeen

Reading the confessions of a teenager contemplating suicide may be uncomfortable, but we must do so to understand why self-harm has become an epidemic, especially in the United States. What drives teenagers to self-harm? What makes death so attractive, so liberating, and so inevitable for so many? In Teenage Suicide Notes, the sociologist Terry Williams pours over the writings of a diverse group of troubled youths to better grasp the motivations behind teenage suicide and to humanize those at risk of taking their own lives.

Williams evaluates young people in rural and urban contexts and across race, class, gender, and sexual orientation. His approach, which combines sensitive portrayals with objective sociological analysis, adds a clarifying dimension to the fickle and often frustrating behavior of adolescents. Williams reads between the lines of his subjects’ seemingly straightforward reflections on alienation, agency, euphoria, and loss, and investigates how this cocktail of emotions can create an overwhelming and impossible desperation. Rather than treat these notes as exceptional examples of self-expression, Williams situates them at the center of teenage life, linking them to incidents of abuse, violence, depression, anxiety, religion, peer pressure, sexual identity, and family dynamics. He captures the currents that turn self-destruction into an act of self-determination, which also allows him to propose more effective solutions to resolving the suicide crisis.