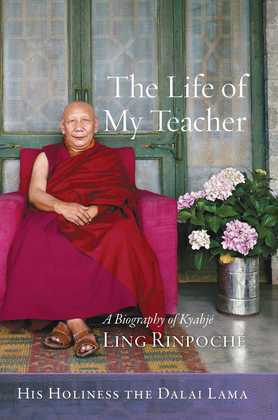 The Life of My Teacher

by Dalai Lama (Author), Gavin Kilty (Translator)
Excerpt
Nonfiction Religion Buddhism
warning_amber
One or more licenses for this book have been acquired by your organisation details
EPUB
Unlimited loans, 2 years, One at a time
Details

The Dalai Lama tells the life story of his remarkable teacher, Ling Rinpoché, who remained a powerful anchor for him from childhood and into his emergence as a global spiritual leader.

The Sixth Ling Rinpoché (1903–83) was a towering figure in Tibetan Buddhism. Combining great learning with great humility, he was ordained by the Thirteenth Dalai Lama and went on to serve as the the head of the Geluk tradition and as the senior tutor to the present Dalai Lama. In temperament and wisdom, he had a profound influence on the Dalai Lama’s spiritual development, and he became a steadying presence for His Holiness during the chaotic changes that defined the Tibetan experience of the twentieth century, with the invasion of their county by Communist forces and the subsequent rebuilding of their culture in India. Ling Rinpoché’s extensive travels among exiled communities abroad and across India bouyed the spirits of the Tibetan diaspora, and the training and activities of this consummate Buddhist master, here told by the Dalai Lama in the traditional Tibetan style, will inspire and amaze.

Over one hundred archival photos bring the text to life.