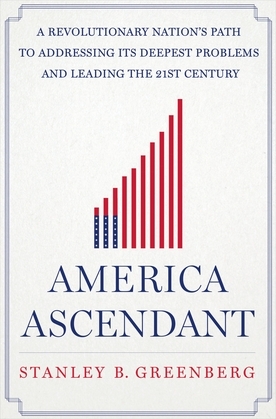 America is poised to lead the 21st Century, as it led the 20th. That will happen because the country is at a tipping point in the battle for its own renewal, a renewal that will allow America to be exceptional again.

Our economy is on the move, fueled by revolutions in energy, immigration, innovation, big data and advanced manufacturing. America's energy independence has set off shockwaves. Just as important are the social transformations that are making the country ever more racially and culturally diverse, younger, a home to immigrants, and the metropolitan centers that foster a rising economic and cultural dynamism. While most other countries struggle profoundly with immigration and religious and racial differences, America's on a path to multicultural identity.

Those revolutions in the economy, society and culture and are also producing a new American majority that embraces new values and new politics. Republicans are waging a counter-revolution and that is why America looks gridlocked and why the country is turning to Democrats to take on the country's growing challenges. The economic and social transformations leave people struggling to earn enough and reach the middle class. Families are under stress. Government is corrupted by big money.

The American public is demanding the country address the dark side of our progress - and reforms are starting to happen. That is why Democrats will get to lead an era of reform and renewal comparable to the progressive era that mitigated the excesses of the Industrial Revolution.

In this incisive book, expert strategist Greenberg draws on years of research and polling to illuminate how America is far from being gridlocked and he articulates a powerful vision of how American politics and America can be renewed.