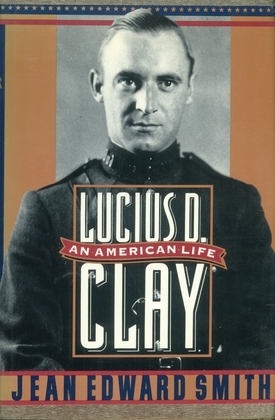 Soldier, statesman, logistical genius: Lucius D. Clay was one of that generation of giants who dedicated their lives to the service of this country, acting with ironclad integrity and selflessness to win a global war and secure a lasting peace. A member of the Army's elite Corps of Engineers, he was tapped by FDR in 1940 to head up a crash program of airport construction and then, in 1942, Roosevelt named him to run wartime military procurement. For three years, Clay oversaw the requirements of an eight-million-man army, setting priorities, negotiating contracts, monitoring production schedules and R&D, coordinating military Lend-Lease, disposing of surplus property-all without a breath of scandal. It was an unprecedented job performed to Clay's rigorous high standards. As Eliot Janeway wrote: "No appointment was more strategic or more fortunate."

If, as head of military procurement, Clay was in effect the nation's economic czar, his job as Military Governor of a devastated Germany was, as John J. McCloy has phrased it, "the nearest thing to a Roman proconsulship the modern world afforded." In 1945, Germany was in ruins, its political and legal structures a shambles, its leadership suspect. Clay had to deal with everything from de-Nazification to quarrelsome allies, from feeding a starving people to processing vast numbers of homeless and displaced. Above all, he had to convince a doubting American public and a hostile State Department that German recovery was essential to the stability of Europe. In doing so, he was to clash repeatedly with Marshall, Kennan, Bohlen, and Dulles not only on how to treat the Germans but also on how to deal with the Russians.

In 1949, Clay stepped down as Military Governor of Germany and Commander of U.S. Forces in Europe. He left behind a country well on the way to full recovery. And if Germany is today both a bulwark of stability and an economic and political success story, much of the credit is due to Clay and his driving vision.

Lucius Clay went on to play key roles in business and politics, advising and working with presidents of both parties and putting his enormous organizing skills and reputation to good use on behalf of his country, whether he was helping run Eisenhower's 1952 campaign, heading up the federal highway program, raising the ransom money for the Bay of Pigs prisoners, or boosting morale in Berlin in the face of the Wall. The Berliners in turn never forgot their debt to Clay. At the foot of his West Point grave, they placed a simple stone tablet: Wir Danken Dem Bewahrer Unserer Freiheit- We Thank the Defender of Our Freedom.