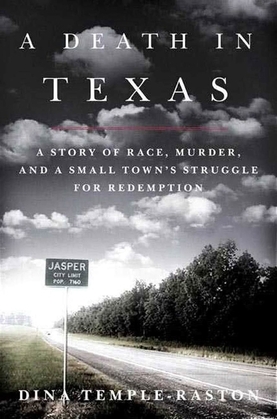 A Death in Texas

An extraordinary account of how a small Texas town struggled to come to grips with its racist past in the aftermath of the brutal murder of James Byrd, Jr.

On June 7, 1998, a forty-nine-year-old black man named James Byrd, Jr., was chained to the bumper of a truck and dragged three miles down a country road by a trio of young white men. It didn't take long for the residents of Jasper, Texas, to learn about the murder or to worry that the name of their town would become the nation's shorthand for hate crimes.

From the initial investigation through the trials and their aftermath, A Death in Texas tells the story of the infamous Byrd murder as seen through the eyes of enlightened Sheriff Billy Rowles. What he sees is a community forced to confront not only a grisly crime but also antebellum traditions about race. Drawing on extensive interviews with key players, journalist Dina Temple-Raston introduces a remarkable cast of characters, from the baby-faced killer, Bill King, to Joe Tonahill, Jasper's white patriarch who can't understand the furor over the killing. There's also James Byrd, the hard-drinking victim with his own dark past; the prosecutor and defense attorneys; and Bill King's father, who is dying of a broken heart as he awaits his son's execution.

Just as Bernard Lefkowitz pulled back the curtain on Glenridge, New Jersey, in his classic work Our Guys, Temple-Raston goes behind the scenes in Jasper, Texas, to tell the story of a town where racism and evil made itself at home