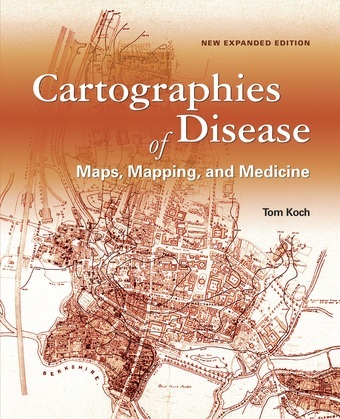 by Tom Koch (Author)
Excerpt
Nonfiction Medical Diseases Social science Human geography Science and technics Technology & engineering Imaging Cartography
warning_amber
One or more licenses for this book have been acquired by your organisation details
EPUB
Unlimited loans, One at a time
Details

Cartographies of Disease: Maps, Mapping, and Medicine, new expanded edition, is a comprehensive survey of the technology of mapping and its relationship to the battle against disease. This look at medical mapping advances the argument that maps are not merely representations of spatial realities but a way of thinking about relationships between viral and bacterial communities, human hosts, and the environments in which diseases flourish. Cartographies of Disease traces the history of medical mapping from its growth in the 19th century during an era of trade and immigration to its renaissance in the 1990s during a new era of globalization. Referencing maps older than John Snow's famous cholera maps of London in the mid-19th century, this survey pulls from the plague maps of the 1600s, while addressing current issues concerning the ability of GIS technology to track diseases worldwide. The original chapters have some minor updating, and two new chapters have been added. Chapter 13 attempts to understand how the hundreds of maps of Ebola revealed not simply disease incidence but the way in which the epidemic itself was perceived. Chapter 14 is about the spatiality of the disease and the means by which different cartographic approaches may affect how infectious outbreaks like ebola can be confronted and contained.