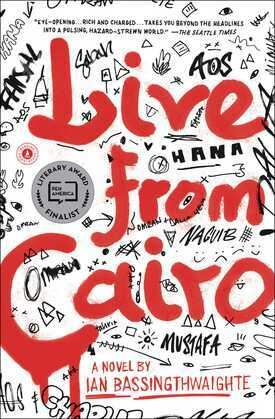 “A remarkable debut novel written by a promising young writer who captures vivid details and writes masterfully” (Christian Science Monitor) about an American attorney, an Egyptian translator, and an Iraqi-American resettlement officer trying to protect a refugee who finds herself trapped in Cairo during the turbulent aftermath of the Spring Awakening.

Cairo, 2011. President Mubarak has just been ousted from power. The oldest city in the world is reeling from political revolution. But for the people actually living there, daily life has become wilder, more dangerous, and, occasionally, freeing.

Live from Cairo is the "Eye-opening... Rich and charged” (Seattle Times) story of these people: Dalia, a strong-willed Iraqi refugee who finds herself trapped in Egypt after her petition to resettle in America with her husband is denied. Charlie, her foolhardy attorney, whose complicated feelings for Dalia have led him to forge a not-entirely-legal plan to get her out. Aos, Charlie’s translator and only friend, who spends his days trying to help people through the system and his nights in Tahrir Square protesting against it. And Hana, a young and disenchanted Iraqi-American resettlement officer, deciding whether to treat Dalia’s plight as one more piece of paperwork, or as a full-blooded human crisis. As these individuals come together, a plot is formed to help Dalia. But soon laws are broken, friendships and marriages are tested, and lives are risked.

A vibrant portrait of a city in all its teeming chaos and glory, Live from Cairo is an exhilarating, electrifying debut, and a stunning testament to the unconquerable desire of people to rise above tragedy to seek love, friendship, humor, and joy. “This brilliantly conceived and artfully detailed novel…is both a comedy and tragedy of errors…Ian Bassingthwaighte’s virtuoso debut deserves the widest attention” (Kirkus Reviews, starred review).