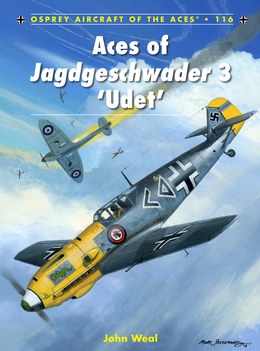 Jagdgeschwader 3 may not have the same immediate resonance as some of the more famous Luftwaffe fighter units, such Jagdgeschwader 2 'Richthofen', but it is arguably the archetypal German fighter formation of World War 2. Not only did it participate in every campaign fought by the Luftwaffe (with the exceptions of Poland and Norway), it flew every major variant of the two legendary German wartime fighters, the Messerschmitt Bf 109 and the Focke-Wulf Fw 190 Â? starting with the Bf 109E in 1939 and ending with the Fw 190D-9 'Long-nose' in 1945. And, during the course of the hostilities, it numbered among its ranks more than 70 Knight's Cross winners (a total exceeded by only one other Jagdgeschwader). The wealth and variety of detail afforded by such a background Â? which includes the historic battles of Britain, Stalingrad, Kursk, Normandy, the Ardennes and Berlin Â? provides an ideal framework upon which to portray the multitude of stories, exploits and ultimate fates of the many aces themselves, from the now unknown trio who achieved their first five kills during the Blitzkrieg in France in the late spring/early summer of 1940 to the nearly two-dozen highly acclaimed and lauded 'centurions' who flew with JG 3.