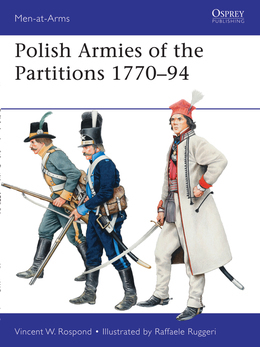 Polish Armies of the Partitions 1770Â?94

The tragic national epic of Polish history began in these late 18th-century wars. Under Poland's Saxon monarchy, Russia and Prussia constantly meddled in the affairs of the Kingdom. In 1768 a civil war broke out between pro-Russian 'Commonwealth' Poles and 'Confederate' patriots who opposed foreign intervention; Russia intervened directly, and the First Partition followed in 1772. Guerrilla resistance continued, and anti-Russian political moves were snuffed out by a second Russian invasion in 1792. Following a Second Partition between Russia and Prussia in 1793, Poland's national hero Thaddeus Kosciusko led a national uprising against the invaders in April 1794. After remarkable victories against the odds at Raclawice and Warsaw, the patriots were finally defeated by the combined armies of Prussia and Russia at Maciejowice. This led to the Third Partition of 1795, between Prussia, Russia, and Austria, and Poland ceased to exist as a political nation. Featuring specially commissioned full-color illustrations, this is the epic story of Poland's doomed struggle to remain independent in the face of aggression from its neighbours in the late 18th century.