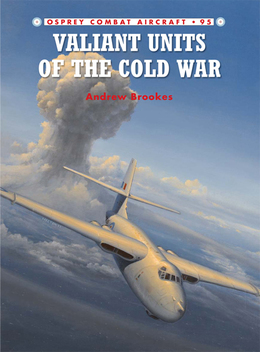 Valiant Units of the Cold War

The RAF's first Cold War strategic bomber, the Vickers Valiant, was procured as an insurance measure in case either the Vulcan or Victor was found to have a serious flaw. The Valiant was the equivalent of the US B-47 Stratojet, and it blazed the trail for the British airborne nuclear deterrent as the aircraft enjoyed a far more active service career than later V-bombers. It was the launch platform for all British free fall nuclear weapons tests both in the Pacific and in central Australia, it took part in the Suez campaign in 1956 and it was the only V-bomber to drop (conventional) weapons in anger until the Falklands operation in 1982. The Valiant was modified to serve in the electronic warfare, strategic reconnaissance and airborne tanker role, but it had to be grounded in early 1965 when the aircraft succumbed to metal fatigue.