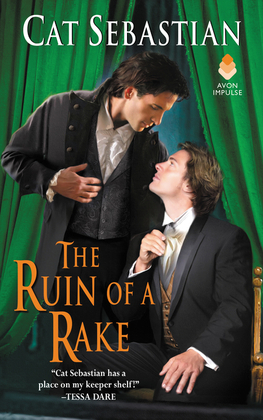 The Ruin of a Rake

by Cat Sebastian (Author)
Fiction LGBTQ+
EPUB
26 loans, One at a time
Details

One of Goodreads' Best Romances of July

“Sebastian proves she is a new force to be reckoned with in historical romances.”—Booklist

Rogue. Libertine. Rake. Lord Courtenay has been called many things and has never much cared. But after the publication of a salacious novel supposedly based on his exploits, he finds himself shunned from society. Unable to see his nephew, he is willing to do anything to improve his reputation, even if that means spending time with the most proper man in London.

Julian Medlock has spent years becoming the epitome of correct behavior. As far as he cares, if Courtenay finds himself in hot water, it’s his own fault for behaving so badly—and being so blasted irresistible. But when Julian’s sister asks him to rehabilitate Courtenay’s image, Julian is forced to spend time with the man he loathes—and lusts after—most.

As Courtenay begins to yearn for a love he fears he doesn’t deserve, Julian starts to understand how desire can drive a man to abandon all sense of propriety. But he has secrets he’s determined to keep, because if the truth came out, it would ruin everyone he loves. Together, they must decide what they’re willing to risk for love.