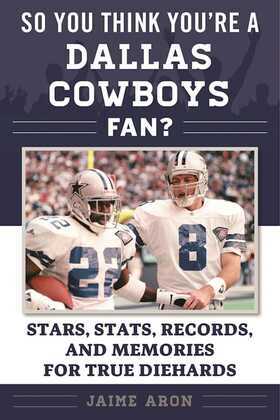 So You Think You're a Dallas Cowboys Fan?

So You Think You?re a Dallas Cowboys Fan? tests and expands your knowledge of America?s Team. Rather than merely posing questions and providing answers, you?ll get details behind eachstories that bring to life players and coaches, games and seasons.

This book, the first in a new sports trivia series, is divided into four parts, with progressively more difficult questions in each new section. The rookie section contains the most basic questions. Next come the Starter and Pro Bowl sections, followed by the biggest challenge: the Ring of Honor.

Also, you?ll learn more about the great Cowboys players and coaches of the past and present, from Roger Staubach to Troy Aikman, Tony Romo, Tony Dorsett, Emmitt Smith, DeMarco Murray, Dez Bryant, Bob Lilly, DeMarcus Ware, Mike Ditka, Jason Witten, Tom Landry, Jerry Jones, and so many more. Some of the many questions that this book answers include:

Who was the first player drafted by the Cowboys?
Tony Romo wears No. 9 in honor of which fictional sports hero?
In the Cowboys? first Super Bowl victory, Roger Staubach threw touchdown passes to two future Pro Football Hall of Famers. Name them.
The Heisman Trophy is the most prestigious individual award in college football. How many Heisman winners have played for the Cowboys? Can you name them all? What college did they attend? What years did they win the Heisman?

This book makes the perfect gift for any fan of America?s Team!