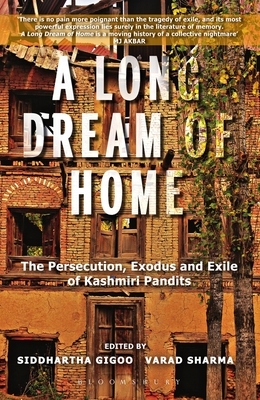 A Long Dream of Home

Twenty-five years ago, in the winter of 1990, about four hundred thousand Pandits of Kashmir were forced to leave Kashmir, their homeland, to save their lives when militancy erupted there. Even today, they continue to live as 'internally displaced migrants' in their own country. While most Kashmiri Pandits have now carved a niche for themselves in different parts of India, several thousands are still languishing in migrant camps in and around Jammu. The stories of their struggles and plight have remained untold for years.
The authors of the memoirs in this anthology belong to four generations. Those who were born and brought up in Kashmir, and fled while they were in their forties and fifties; those who lingered on in their homes in Kashmir despite the threat to their lives; those who got displaced in their teens; and those who were born in migrant camps in exile. These narratives explore several aspects of the history, cultural identity and existence of the Kashmiri Pandits.These are untold narratives about the persecution of Pandits in Kashmir during the advent of militancy in 1989, the killings and kidnappings, loss of homeland, uprootedness, camp-life, struggle, survival, alienation and an ardent yearning to return to their land. These are stories about the re-discovery of their past, their ancestry, culture, and roots and moorings.