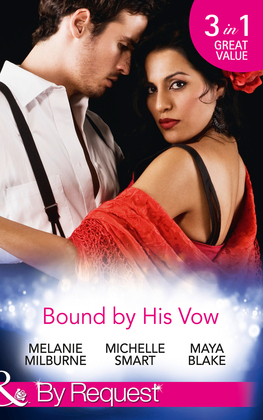 Bound By His Vow: His Final Bargain / The Rings That Bind / Marriage Made of Secrets (Mills & Boon By Request)

Eliza Lincoln is stunned to find Leo Valente at her door; four years ago his passionate embrace was a brief taste of freedom from her suffocating engagement. Until Leo discovered her secret.

Yet he hasn't come to rekindle their affair. He has a proposition he knows Eliza can’t refuse; she’s the only person who can help his small motherless daughter.

Torn, Eliza can’t ignore a vulnerable child, but the last time she was near Leo her desire nearly consumed her. Is she willing to take that risk again now that the stakes are even higher?

The Rings That Bind

The day Rosa agreed to wear Nicolai Baranski’s ring she wasn’t so foolish as to expect love.Yet nothing could have prepared her for the aching loneliness of her husband’s constant indifference – an indifference that proved too much to bear.

Nico is furious – no one turns their back on a Baranski. Rosa has some nerve if she thinks he would just let her walk away. He’ll use every sensual trick at his disposal to bring her back, begging for more. And once he’s got her where he wants her? He’ll let her go. But only when he’s ready!

Marriage Made of Secrets

It takes an earthquake for billionaire businessman Cesare di Goia to realise what’s important in life. His wife may have become a stranger, but he’s determined to keep his heir close.

Returning to the luxurious Lake Como palazzo with her daughter, Ava di Goia feels like an outsider in what was once their home. Although the bond between them is undeniable, the memories, tarnished rings and broken promises make it clear that the secrets that drove them apart are still unresolved…