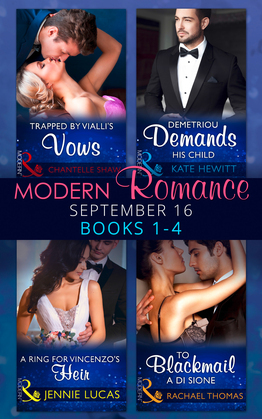 To Blackmail a Di Sione by Rachael Thomas

Billionaire Liev Dragunov has spent a lifetime plotting revenge against those responsible for his family's ruin. Finally he has the way: Bianca Di Sione. She's denied their obvious attraction and coolly rebuffs every request to work for him-until he finds her weakness: a diamond bracelet she desperately needs! Bianca must become his fake fiancee if she wants her trinket! But the taste of revenge isn't as sweet as desire, and Liev discovers that she is innocent in more ways than one…

A Ring for Vincenzo's Heir by Jennie Lucas

Scarlett Redwood takes an enormous risk interrupting Vincenzo Borgia's wedding. He's rich and powerful, whereas she's penniless and alone but she needs his help…to protect their unborn child! Vincenzo's furious that Scarlett kept the pregnancy from him, but to claim his heir he has no other option than to make her his wife. Scarlett hadn't imagined a 24 carat diamond would feel so heavy; it weighs on the ache in her heart. Because she might not get the one, truly priceless, thing she desires…For his heart is off limits!

Ten years ago, innocent Iolanthe Petrakis surrendered to the most ruthless tycoon in Athens. Alekos Demetriou gave her the one and only sinfully seductive night of her life. But when he discovered she was the daughter of his enemy, he cast her out…before Iolanthe could reveal she was pregnant with his child! Now, with her family's company in peril, Iolanthe's forced to reveal her most precious secret to her nemesis. When he learns the truth, Alekos declares he will legitimize his son and, to Iolanthe's horror, informs her they will marry!

After falling for the notorious Italian tycoon, waitress Marnie Clarke is horrified to discover that – in Leandro Vialli's world – she's 'his dirty little secret'. It breaks her fragile heart and she flees with her dignity…and their unborn baby! Leandro refused to believe the child was his, until a paternity test proved him wrong. So when a shocking accident steals Marnie's memories, he seizes his chance. Convincing Marnie that she's his fiance is Leandro's only chance to secure his legacy.
But before Leandro can say, I do, the past comes crashing back and Marnie remembers everything…