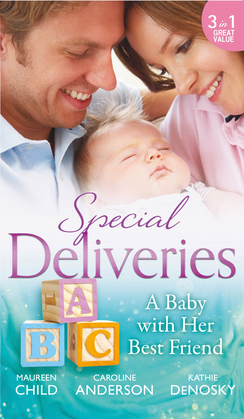 Special Deliveries: A Baby With Her Best Friend: Rumour Has It / The Secret in His Heart / A Baby Between Friends (Mills & Boon M&B)

Seven years ago, wealthy sheriff Nathan Battle proposed to his pregnant girlfriend. But Amanda Altman ripped out his heart, left town – and suffered a miscarriage. Now she's back and Nathan has to get over her once and for all. But his plan to seduce her, say goodbye forever and focus on his job isn't working too well.

Upon returning to gossipy Royal, Texas, Amanda's determined not to show Nathan how much she still loves him. Yet resisting the gorgeous lawman is impossible. Especially when she discovers she's pregnant with his child…again.

The Secret in His Heart

He had promised to look after her…now he wants so much more.

"Promise me you'll take care of her." Simple as that. Except for Dr. James Slater, fulfilling his vow to look after his best friend's wife after he died in Afghanistan has never been simple. Especially now that lovely, vital Connie has asked him to help her have a baby. He can't just father her child and then walk away – he wants and loves her too much for that. Only, how can he even begin to tell her…?

A Baby Between Friends

What Are Best Friends For?

More than anything, Summer Patterson wants a baby. What she doesn't want is a husband. Thankfully, her best friend, Ryder McClain, makes the perfect sperm donor. Ryder is loyal, undeniably sexy and the one man she trusts – the only reason she agrees to conceive their baby naturally.

When baby-making nights with Summer blaze like the West Texas sun, Ryder feels the heat. He never expected Summer to say yes to sharing his bed. Now he's falling for her – and the prospect of fatherhood – while hiding a secret that could destroy her faith in him forever.