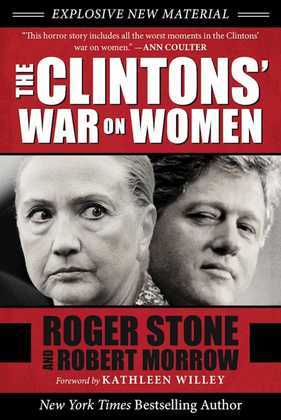 The Clintons' War on Women

Hillary Clinton is running for president as an advocate of women and girls,? but there is another shocking side to her story that has been carefully covered upuntil now. This stunning exposé reveals for the first time how Bill and Hillary Clinton systematically abused women and otherssexually, physically, and psychologicallyin their scramble for power and wealth.

In this groundbreaking book, New York Times bestselling author Roger Stone and researcher and alternative historian Robert Morrow map the arc of Bill and Hillary?s crimes and cover-ups. They reveal details about their actions in Arkansas, during Bill Clinton?s time in the White House, about who really ordered the deadly attack on the Branch Davidian compound in Waco, during Hillary?s tenure as secretary of state, about their time at the Clinton Foundation, and during Hillary?s current campaign for president.

This is the first book to shed light on the couple?s deeply personal violations of the people they crushed in their obsessive quest for power. Along the way, Stone and Morrow reveal the family?s darkest secrets, including a Clinton family member?s drug rehab treatment that was never reported by the press, Hillary Clinton?s unusually close relationship with a top female aide, and a stunning revelation of such impact that it could strip Bill Clinton of his current popularity and derail Hillary?s push to be the second Clinton in the White House.

Anyone who cares about the future of the United States will want to read this tell-all, exposing the appalling, unvarnished, and ugly truth about the Clintons. This paperback edition includes a new preface from Roger Stone, revealing explosive new information he?s learned since the hardcover?s release.