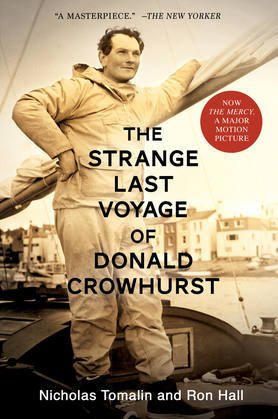 On Halloween Day, 1968, weekend sailor and lifelong tinkerer Donald Crowhurst set sail aboard an untested trimaran, The Teignmouth Electron, determined to win the first-ever official race to single-handedly circumnavigate the globe. At stake was a generous cash prize that would save his failing business from insolvency and provide an opportunity to very publicly prove the value of the device he had invented (and that his business manufactured): the Navicator, a handheld marine navigation device. The race was sponsored by the Sunday Times, so the victor would get not just money but invaluable media exposure.

Even before the race began, things looked uncertain for Crowhurst. The boat he was sailing was of a completely new design, as yet unproven; one observer noted that the boat was very fast but that it couldn't sail close to the wind. And when it was running at full speed it began to vibrate, shaking loose the screws in the self-steering apparatus. Ironically, even Crowhurst's navigational abilities were questioned during a pre-race test sail. Worst of all, there wasn't time to add in all the usual safety features. Undeterred, Crowhurst just beat the October 31 deadline for departure and headed into open water.

Soon after the race began, Crowhurst ran into trouble, sailing far more slowly than he had planned. It wasn't long before he realized that he had no chance of winning the race whatsoever, and instead faced a difficult choice: finish the race and risk his life aboard a boat he couldn't control; give up in defeat and send his business into bankruptcy; or take a shortcut and falsify his navigational logs. Fatefully, Crowhurst chose the latter, maintaining from that moment on two logs--one actual and one invented--about his progress.

Pieced together by two Times reporters following the discovery of the abandoned Teignmouth Electron (and Crowhurst's navigational logs), Deep Water captures the enigma at the center of Crowhurst's final voyage--a quixotic attempt to save his business, and to provide for his young family, by attempting to become the first person to sail around the world without stopping. It is a mesmerizing journey into uncharted territory, not just of the world's oceans but of the darkest corners of the human mind.