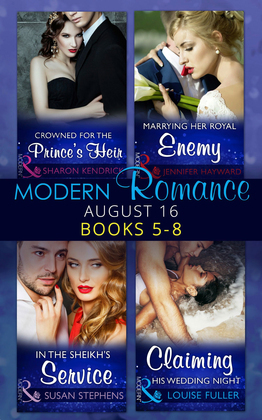 Crowned for the Prince's Heir by Sharon Kendrick

Dress designer Lisa Bailey reluctantly broke off her relationship with Luc, knowing an affair with the Prince had no future. But one last stolen encounter left her quaking with passion, drenched in desire—and unexpectedly pregnant!

Months later, Prince Luciano Leonidas of Mardovia is on the brink of the perfect political marriage when a news article shows Lisa with an obvious bump! His baby. With Mardovian royal blood. Now he must claim his heir at any cost. She might be an unsuitable bride, but she will become his Queen!

In the Sheikh's Service by Susan Stevens

Sheikh Shazim Al Q’Aqabi is horrified to discover that the woman who will execute his late brother’s conservation dream is the exotic dancer he encountered in London!

But Isla Sinclair’s feisty nature is like a cool glass of water in the desert to the un-challenged ruler. For his entire life, Shazim’s only mistress has been duty. Now he’s considering a far more pleasurable way to spend his nights under the desert stars.

Yet acting on his desire for such an unsuitable woman would be tantamount to treason! Shazim will have to make the hardest decision of his life…

Most women would kill to be draped in ivory lace and walking up the aisle towards King Kostas Laskos. Stella Constantinides isn’t most women. But for peace in her kingdom, she’s agreed to marry the man she once bared her heart to with disastrous effect.

The feisty princess refuses to be his pawn, yet one night in their marriage bed proves that Stella will never be immune to her husband’s charms. Soon Stella begins to see a truth behind the sins of their past… and she finds herself doing what she swore she’d never do – fall for her husband?

Addie Farrell’s marriage to casino magnate Malachi King lasted exactly one day, until she discovered their love was a sham. Now, with funding for her children’s charity about to be cut, Addie must face her husband – and their dangerously seductive chemistry – once again!

Humiliated and frustrated after Addie’s sudden departure, Malachi seizes the chance to put the power back where it belongs. In his hands. The deal: Malachi will give her the money she desperately needs, if she returns to his side…and finally he will claim his long-awaited wedding night!