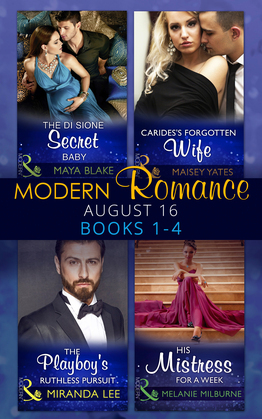 Charity CEO Allegra Di Sione can’t fail in her mission to retrieve her grandfather’s beloved box from Sheikh Rahim Al-Hadi, which is why she gets caught in Rahim’s sumptuous bedroom trying to steal it!

Seducing the gorgeous sheikh is her only chance at escape! But when Allegra slips away the next morning she’s unaware she now carries something infinitely more precious – and that when Rahim finds out, he’ll have no choice but to make his enticing thief his queen!

Greek billionaire Leon Carides has it all: wealth, power, notoriety, even a wife – though he’s never touched his convenient, innocent, bride. Then an accident rids this damaged, debauched playboy of his memories…

Leon remembers nothing, except his wife’s sparkling blue eyes. Now, the desire he feels for Rose overrides the gaps in his past, making her impossible to resist! But when his sins catch up with him, can Rose forgive the mistakes of the man he once was? Or will Leon lose more than just his memory?

When you’re as handsome, dynamic and wealthy as British tycoon Jeremy Barker-Whittle, there’s no shortage of stunning women willing to share your bed. So when Alice Waterhouse says no, it’s a challenge the jaded playboy can’t refuse.

But discovering Alice’s carefully guarded innocence puts paid to Jeremy’s thoughts of briefly stolen passion. The cynical CEO must put aside this delicate beauty… until Alice shocks by asking him to take her virginity!

As Jeremy toys with the temptation to be the first man to show Alice pleasure, he’s unaware that she could be the first woman to tame him…

His Mistress for a Week by Melanie Milburne

Ten years ago bookshop assistant Clementine Scott clashed spectacularly with architect Alistair Hawthorne. After the humiliation of that night she swore she’d never have anything to do with any man every again, especially the arrogant Alistair!

But when Clem’s brother disappears with Alistair’s step-sister, she isn’t given a choice…she will be going with Alistair to Monte Carlo to retrieve them! Forced together for one week, they quickly realise that their enmity masks simmering, sizzling lust. They strike a deal – for one week only, all bets – and clothes – are off!