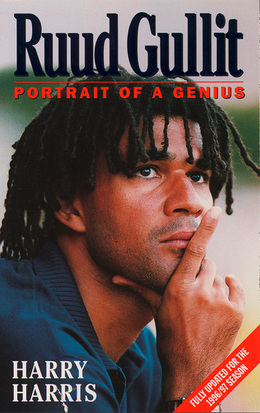 Ruud Gullit: Portrait of a Genius (Text Only)

First published in 1997 and now available as an ebook.

Two years after arriving in London, Ruud Gullit took English football by storm, not only revolutionising Chelsea Football Club but helping to transform the image of the Premier League so that it now attracts the best footballers from all over the world.

Not that it was plain sailing for Chelsea’s player-manager throughout his career. In between winning European Cups with AC Milan and a European championship with Holland, Gullit experienced a succession of bust-ups with former managers and fellow players, disputes with his clubs and personal distractions off the pitch, suggesting that there is a harder, ruthless side to his character.

What are the pressures involved in being a player-manager for a top London club? Who, in 1997, were the best players in England? How did Chelsea’s foreign stars such as Zola, Vialli and Di Matteo adjust to the demands of Premiership football? The answers can be found in Harry Harris’s profile of Gullit which includes Chelsea’s memorable 1997 FA Cup triumph and a review of the club’s 1996/97 Premier League season.