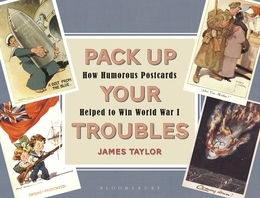 Pack Up Your Troubles

Artist-drawn humorous postcards were growing considerably in popularity at the start of the 20th century. When war broke out in 1914 trade in them soared as the government utilised them as a widespread means of communication, to bolster morale, stiffen resolve and lift up the spirits in the field, at sea and on the home front from 1914 to 1919.

They were also an excellent tool for recording and commenting on military and civilian events as they unfolded. Although the conflict was no laughing matter, humour helped to bring people together and feel stronger during a time of suffering; these postcards helped achieved this and they are therefore considered as significant historical documents.

Pack Up Your Troubles is the first book of this kind to focus exclusively on the impact of British humour in the art of the picture postcards of World War One, both in the field and on the home front. The book is divided into themed chapters of the era, from Camp Life and Training to The Western Front through to Women at War and many more in between. Each section shows approximately 20 postcards within that theme, each with an explanatory caption.

This book would be an ideal gift for anyone with an interest in war and military history, art and design, cartoons, and anyone who enjoys humour and laughing.