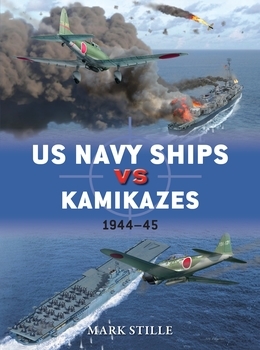 The ineffectiveness of conventional air attacks on US Navy surface ships, particularly heavily defended targets like carrier task groups, forced the Japanese to re-evaluate their tactics in late 1944. The solution they arrived at was simple Â? crash their aircraft into American ships. This notion of self-sacrifice fit well within the Japanese warrior psyche and proved terrifying to the American sailors subjected to it. These tactics brought immediate results, and proved effective until the end of the war.
This book examines this terrifying new way of waging war, revealing how the US Navy was forced to adapt its tactics and deploy new weapons to counter the threat posed by kamikaze attacks, as well as assessing whether the damage caused to American naval strength by the loss of so many pilots and aircraft actually had a material impact.