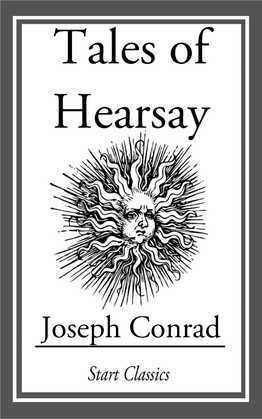 The old officer with long white moustaches gave rein to his indignation. "Is it possible that you youngsters should have no more sense than that! Some of you had better wipe the milk off your upper lip before you start to pass judgment on the few poor stragglers of a generation which has done and suffered not a little in its time." His hearers having expressed much compunction the ancient warrior became appeased. But he was not silenced. "I am one of them?one of the stragglers, I mean," he went on patiently. "And what did we do? What have we achieved? He?the great Napoleon?started upon us to emulate the Macedonian Alexander, with a ruck of nations at his back. We opposed empty spaces to French impetuosity, then we offered them an interminable battle so that their army went at last to sleep in its positions lying down on the heaps of its own dead. Then came the wall of fire in Moscow. It toppled down on them. "Then began the long rout of the Grand Army. I have seen it stream on, like the doomed flight of haggard, spectral sinners across the innermost frozen circle of Dante's Inferno, ever widening before their despairing eyes. "They who escaped must have had their souls doubly riveted inside their bodies to carry them out of Russia through that frost fit to split rocks. But to say that it was our fault that a single one of them got away is mere ignorance. Why! Our own men suffered nearly to the limit of their strength. Their Russian strength!