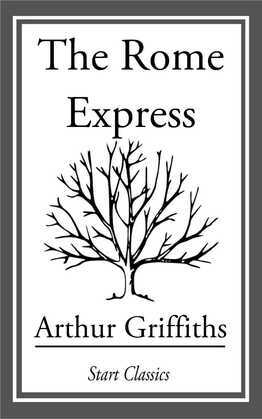 A mysterious murder on a flying express train, a wily Italian, a charming woman caught in the meshes of circumstantial evidence, a chivalrous Englishman, and a police force with a keen nose for the wrong clue, are the ingredients from which Major Griffiths has concocted a clever, up-to-date detective story. Arthur George Frederick Griffiths was an English author. His works include: The Chronicles of Newgate (1884), In Tight Places: Some Experiences of an Amateur Detective (1900), The Thin Red Line, and Blue Blood (1900), Tales of a Government Official (1902), A Bid for Empire (1902), The Silver Spoon (1903), The Passenger from Calais (1905), Agony Terrace: Some Secrets of the Cynosure Club (1907), The Rome Express (1907) and Thrice Captive (1908).