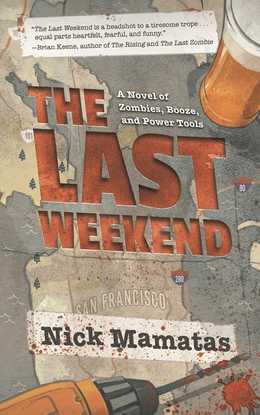 Vasilis "Billy" Kostopolos is a Bay Area Rust Belt refugee, failed sci-fi writer, successful barfly and, since the exceptionally American zombie apocalypse, an accomplished "driller" of reanimated corpses. There aren't many sane, well-adjusted human beings left in San Francisco, but facing the end of the world, Billy's found his vocation trepanning the undead, peddling his one and only published short story, and drinking himself to death. Things don't stay static for long. Billy discovers that both his girlfriends turn out to be homicidal revolutionaries. He collides with a gang of Berkeley scientists gone berserker. Finally, the long-awaited "Big One" shakes the foundation of San Francisco to its core, and the crumbled remains of City Hall can no longer hide the awful secret lurking deep in the basement. Can Billy unearth the truth behind America's demise and San Francisco's survival—and will he destroy what little's left of it in the process? Is he legend, the last man, or just another sucker on the vine? Nick Mamatas takes a high-powered drill to the lurching, groaning conventions of zombie dystopias and conspiracy thrillers, sparing no cliché about tortured artists, alcoholic "genius," noir action heroes, survivalist dogma, or starry-eyed California dreaming. Starting in booze-soaked but very clear-eyed cynicism and ending in gloriously uncozy catastrophe, The Last Weekend is merciless, uncomfortably perceptive, and bleakly hilarious.