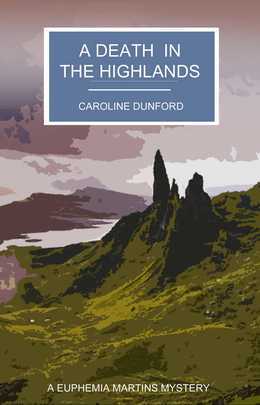 A Death in the Highlands

"A sparkling and witty crime debut with a female protagonist to challenge Miss Marple." Lin Anderson, Award winning Scottish crime author A Death in the Highlands - Books Two of the Euphemia Martin Mysteries After dodging criminal charges, Richard returns as head of the household at Stapleford Hall. Changing fortunes find Euphemia temporarily promoted to housekeeper for the first trip to the family's new hunting lodge in the Scottish Highlands, where she is meets Rory Macleod, the new butler. Taking on her new role, she encounters angry locals with a grudge against the Staplefords and thwarts what she believes to be an attempt on Bertram Stapleford's life. A strange group of house guests arrive for the Glorious Twelfth, but with disastrous consequences. Euphemia finds herself caught in the midst of bitter rivalries, and evidence pointing to several murder suspects. Will she unravel the mystery?