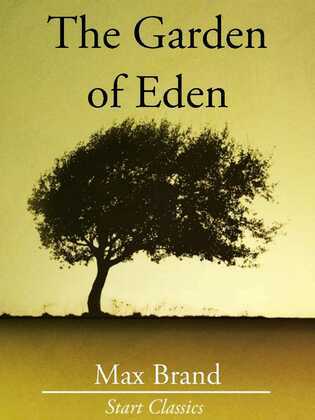 The Garden of Eden

By careful tailoring the broad shoulders of Ben Connor were made to appear fashionably slender, and he disguised the depth of his chest by a stoop whose model slouched along Broadway somewhere between sunset and dawn. He wore, moreover, the first or second pair of spats that had ever stepped off the train at Lukin Junction, a glowing Scotch tweed, and a Panama hat of the color and weave of fine old linen. There was a skeleton at this Feast of Fashion, however, for only tight gloves could make the stubby fingers and broad palms of Connor presentable. At ninety-five in the shade gloves were out of the question, so he held a pair of yellow chamois in one hand and in the other an amber-headed cane. This was the end of the little spur-line, and while the train backed off down the track, staggering across the switch, Ben Connor looked after it, leaning upon his cane just forcibly enough to feel the flection of the wood. This was one of his attitudes of elegance, and when the train was out of sight, and only the puffs of white vapor rolled around the shoulder of the hill, he turned to look the town over, having already given Lukin Junction ample time to look over Ben Connor.