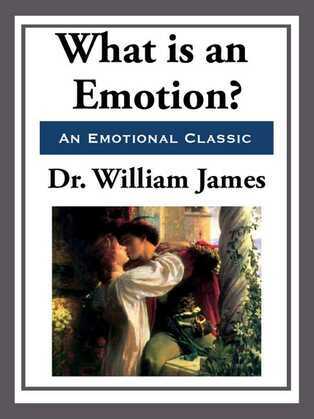 What is an Emotion?

I should say first of all that the only emotions I propose expressly to consider here are those that have a distinct bodily expression. That there are feelings of pleasure and displeasure, of interest and excitement, bound up with mental operations, but having no obvious bodily expression for their consequence, would, I suppose, be held true by most readers. Certain arrangements of sounds, of lines, of colours are agreeable, and others the reverse, without the degree of the feeling being sufficient to quicken the pulse or breathing, or to prompt to movements of either the body or the face. Certain sequences of ideas charm us as much as others tire us. It is a real intellectual delight to get a problem solved, and a real intellectual torment to have to leave it unfinished. The first set of examples, the sounds, lines, and colours, are either bodily sensations, or the images of such. The second set seem to depend on processes in the ideational centres exclusively. Taken together, they appear to prove that there are pleasures and pains inherent in certain forms of nerve-action as such, wherever that action occur. The case of these feelings we will at present leave entirely aside, and confine our attention to the more complicated cases in which a wave of bodily disturbance of some kind accompanies the perception of the interesting sights or sounds, or the passage of the exciting train of ideas. Surprise, curiosity, rapture, fear, anger, lust, greed, and the like, become then the names of the mental states with which the person is possessed. The bodily disturbances are said to be the "manifestation" of these several emotions, their "expression" or "natural language;" and these emotions themselves, being so strongly characterized both from within and without, may be called the standard emotions. --William James