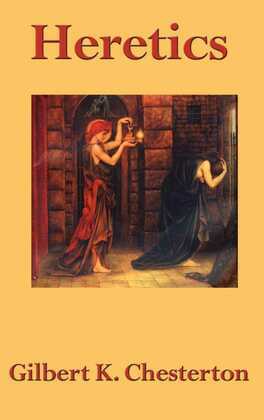 In Heretics, Gilbert K. Chesterton rails against what he sees as wrong with society. He points out how society has gone astray and how life and spiritually could be brought back into focus. It is foolish, generally speaking, for a philosopher to set fire to another philosopher in Smithfield Market because they do not agree in their theory of the universe. That was done very frequently in the last decadence of the Middle Ages, and it failed altogether in its object. But there is one thing that is infinitely more absurd and unpractical than burning a man for his philosophy. This is the habit of saying that his philosophy does not matter, and this is done universally in the twentieth century, in the decadence of the great revolutionary period. - G. K. Chesterton