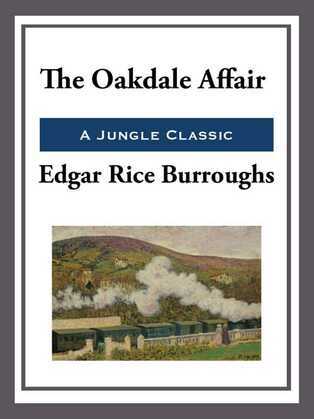 The THING moved down the hallway to the closed door. The dragging chain marked each foot of its advance. If it made other sounds they were drowned by the clanking of the links over the time roughened flooring. Within the room the five were frozen into utter silence, and beyond the door an equal quiet prevailed for a long minute; then a great force made the door creak and a weird scratching sounded high up upon the old fashioned panelling. Bridge heard a smothered gasp from the boy beside him, followed instantly by a flash of flame and the crack of a small caliber automatic; The Oskaloosa Kid had fired through the door. Edgar Rice Burroughs created one of the most iconic figures in American pop culture, Tarzan of the Apes, and it is impossible to overstate his influence on entire genres of popular literature in the decades after his enormously winning pulp novels stormed the public's imagination. The sequel to The Mucker, considered Burroughs' finest novel, The Oakdale Affair follows the continuing adventures of Mucker hero Billy Byrne's best friend, Bridge, in a tale of kidnapping, jewel thievery, and other nefarious acts in the devastated social and economic landscape of post-World War I America. Originally appearing as a serial in 1918, it did not appear first in book form until 1937.