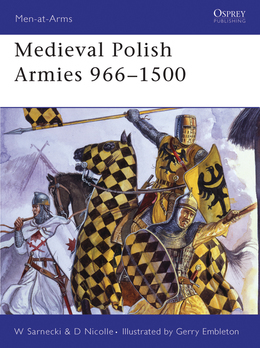 The history of Poland is a fascinating story of a people struggling to achieve nationhood in the face of internal and external conflict. Poland became a unified Christian state in AD 966 and by the 12th century a knightly class had emerged a force that was integral to the defence of Poland against increasingly frequent foreign invasions. Intent on crushing rival Christian states, the Templars, Hospitallers and Teutonic Knights all mounted attacks but were beaten back by the Poles, as were invading Mongols and Turks. This book reveals the organisation, equipment and battle histories of the medieval Polish armies as they developed and modernised to emerge as one of the dominant powers of Eastern Europe.