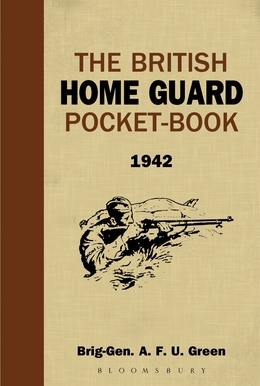 The Home Guards are an attacking force lying in wait for, and ready to destroy, and enemy who dares to set foot on out shores.' The Home Guard has been immortalised in British culture in the TV series Dad's Army. Formed by men not eligible for active service Â? too old, too young, in reserved occupations vital to the war effort Â? who were expected to resist a German invasion with any resources they had to hand, the Home Guard is the embodiment of plucky British resolve against the odds.

The Home Guard Pocket-Book evokes this spirit. Written by Brig-Gen Green, commanding 4th battalion, Sussex Home Guard and Training Adviser for the Sussex Zone, this book is based on his experience and, in his own words, 'is the result of my ransacking the dusty pigeon-holes of memory and the condensation of many books, official instructions and writings'. Its tone is informal and colloquial, such as: 'March discipline. Troops will always march off the parade ground at the Slope. As soon as this has been done the order "March at Ease" should be given. When marching at ease the rifle may be carried in any way a soldier fancies.' Nevertheless, the book is full of sound advice on training, organisation and discipline, fire arms, reconnaissance and field engineering, the responsibilities of the Group Pigeon Officer, the proper position to adopt for surviving a dive bomb attack, and how to set a trap for an unwary advancing German cyclist!