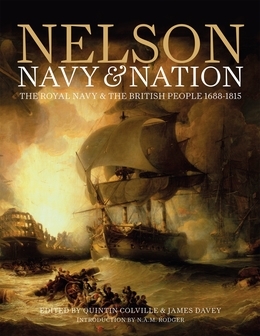 Nelson, Navy & Nation explores the Royal Navy's relationship with Britain from the Glorious Revolution to the Napoleonic Wars. The book encompasses the realities of naval life in this period; the navy's connection to society; culture and national identity; and the story of Nelson's life and career. It brings together a distinguished panel of leading historians including Roger Knight, Andrew Lambert, Brian Lavery, N.A.M. Rodger and Dan Snow.
Together, they give a fascinating contextual overview, from the terrifying realities of battle in the age of sail to the lives of ordinary people ashore who celebrated the navy's achievements. It places the extraordinary achievements of Horatio Nelson within a wider context that makes sense of his dazzling celebrity. In so doing, it reveals that the story of the Royal Navy and Nelson is also the story of the fears and ambitions of the British people.
Beautifully illustrated throughout from the world-leading collections of the National Maritime Museum, the book combines accessible narrative history for the general reader with superb visual appeal. It is an ideal companion to the Museum's new permanent 'Nelson, Navy, Nation' gallery, which opened in October 2013.