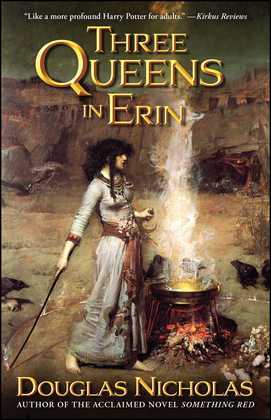 Maeve and her family?her granddaughter Nemain, Nemain's husband Hob, their six-year-old daughter Macha Redmane, and Maeve's lover Jack Brown?have decided it is time to return to Ireland and reclaim her tribal lands. Journeying over the sea, the family finally learns the secrets behind their long exile: a clan of Viking/Scots known as the Norse Gaels, slew the chief warriors and leaders of Maeve's clan through cunning black magic. But in returning to Ireland, Maeve and her family must face the three leaders of the Norse Gaels. These three queens, dark versions of Celtic goddesses, are evil sisters whose powers rival Maeve's own.

When a monster is unleashed upon the countryside, Maeve and Nemain must create a beast of their own, at cost of great sorcerous effort to themselves. With his signature blend of historical adventure and supernatural fantasy, Nicholas' fans will love this rich addition to the series.