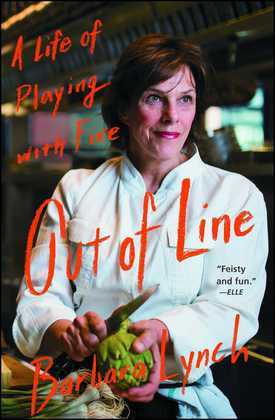 Out of Line: A Life of Playing with Fire

“If you have an appetite for culinary adventure, you’ll devour the feisty and fun memoir” (Elle magazine) by James Beard award-winning chef, restaurateur, and Top Chef judge Barbara Lynch as she recounts her rise from her rough “Southie” childhood to culinary stardom.

Celebrated chef Barbara Lynch?named one of Time magazine's 100 Most Influential People in 2017?credits the defiant spirit of her upbringing in tough, poor “Southie,” a neighborhood ruled by the notorious Whitey Bulger gang, with helping her bluff her way into her first professional cooking jobs; develop a distinct culinary style through instinct and sheer moxie; then dare to found an empire of restaurants ranging from a casual but elegant “clam shack” to Boston’s epitome of modern haute cuisine. As award-winning chef Ana Sortun raves, “Her heroic story inspires us to remain true to who we are and honor our dreams with conviction.”

One of seven children born to an overworked single mother, Lynch was raised in a housing project. She earned a daredevil reputation for boosting vehicles (even a city bus), petty theft, drinking and doing drugs, and narrowly escaping arrest?haunted all the while by a painful buried trauma.

Out of Line describes Lynch’s remarkable process of self-invention, including her encounters with colorful characters of the food world, and vividly evokes the magic of creation in the kitchen. It is also a love letter to South Boston and its vanishing culture, governed by Irish Catholic mothers and its own code of honor. “Foodies will enjoy the vivid language used to describe Lynch’s food exploits, and old neighbors will be treated to a trip around south Boston through the eyes of a local” (Library Journal). Through her story, Lynch explores how the past?both what we strive to escape from and what we remain true to?can strengthen and expand who we are.