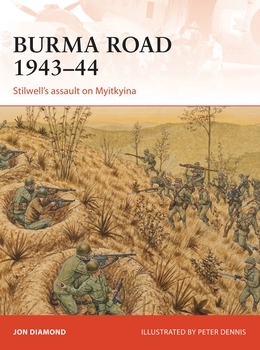 Myitkyina was a vital objective in the Allied re-conquest of Burma in 1943Â?44. Following the disastrous retreat from Burma in April 1942, China had become isolated from re-supply except for the dangerous air route for US transports over the Himalaya Mountains. The Burma Road, which ran from Lashio (south of Myitkyina) through the mountains to Kunming was closed as a supply route from Rangoon after the Japanese conquest. Without military assistance, China would be forced to surrender and Imperial Japanese Army forces could be diverted to other Pacific war zones.
This is the history of the ambitious joint Allied assault led by American Lt. Gen. Joseph W Stilwell and featuring British, American and Chinese forces as they clashed with three skilled regiments of the Japanese 18th Division. Packed with first-hand accounts, specially commissioned artwork, maps and illustrations and dozens of rare photographs this book reveals the incredible Allied attack on Myitkyina.