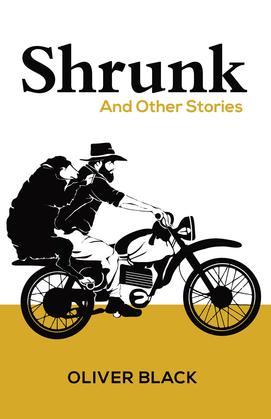 Shrunk: And Other Stories

Oliver Black is a brilliant, acerbic humorist with David Sedaris’s eye for absurdity and Jenny Lawson’s knack of unlocking the hilarious side of anxiety and depression. Irreverent and sometimes shocking, Shrunk And Other Stories is a collection of achingly funny tales from the wilder shores of his frequently turbulent life.

Covering, among other subjects, funeral arrangements, fad diets, funny pets, old age, and his encounters with the upper classes, this caustic memoir is a joy to read.

A martyr to stress, Black casts a jaundiced eye over the woeful inadequacies of psychiatry and psychology as he seeks help in shoring up his tenuous grip on sanity from a series of hopeless therapists and peddlers of alternative medicine.

As ‘London’s leading hypochondriac’, he keeps a medical encyclopedia by his bed, has a Howard Hughes-scale fear of germs, and is on first-name terms with Vera, his long-suffering doctor. With unflinching honesty he catalogues his numerous complaints, ranging from aching testicles through tinnitus to, horrifyingly and unforgettably, worms.

The fifty-something philosophy professor and former lawyer details his jaw-dropping adventures in the DIY funeral business, a trade to which his wife ‘Fluffy’ - rarely has a pet name seemed less appropriate - takes with unnerving enthusiasm.

We learn about the delights and otherwise of driving a black taxi as a private car, and of the considerable talents of Black’s cat, Maud (his deep love for Maud notwithstanding, he is troubled by fantasies of boiling her alive).

Along the way, there are surreal meditations upon the possibility of autistic dogs, humming noises as preservers of life, and the anxiety occasioned by hiding one’s underpants beneath the floorboards.

This is a deliciously funny book by a major comic talent.

‘Shrunk is hilarious and unsettling by turns.  “Black humour” now has a new meaning.’

‘Oliver Black’s tales of a turbulent life are frank, fearless and extremely funny.  Our readers have loved them.’

‘If you can already imagine a cross between Mr Pooter, Alan Bennett and Diogenes, then fair enough.  If not, you need this darkly hilarious book.’

- Anthony Gottlieb, author of The Dream of Reason