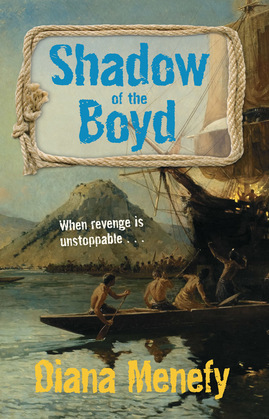 Shadow of the Boyd

by Diana Menefy (Author)
EPUB
26 loans, One at a time
Details

Exciting historical adventure for younger readers. Winner of the LIANZA Esther Glen Award 2011. A powerful story from our colonial past, in which the bitter clash of two conflicting sets of cultural values is explored from the point of view of a young boy who survived the infamous massacre of the Boyd. A young Maori of high status is brutally flogged on the order of the captain on a journey back to New Zealand, and when the ship makes landfall in the bay of islands and he tells his people about what has happened to him, and how his mana has been trampled upon, his people carry out a bloody act of utu, or revenge, which results in the massacre of the ship's occupants, with many eaten, and the eventual destruction of the ship in a fiery explosion. A handful of pakeha were left alive, and it is their enthralling story which unfolds in this brilliantly written and evocative historical novel. Based on a true life tragedy, it is both a classic adventure and a poignant coming of age story about a young ship's boy. Caught up in a bloody and tragic encounter between early Maori and Pakeha, his extraordinary experiences are skilfully used to explores the incident from the point of view of a young participant, and at the same time present children with the two sides to our history. As well, the author brilliantly evokes the realities of life for children in those times. Brilliantly researched, an enthralling read, with significant potential for next year's literary awards. Age 12+