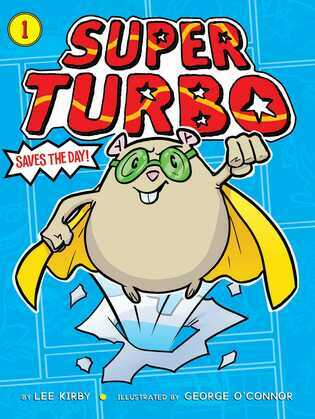 He?s not just the class pet hamster, he?s SUPER TURBO! In this brand-new series that?s packed with adventure, Captain Awesome?s loyal sidekick is the star of the show!

You know Turbo as the crime-fighting hamster from the Captain Awesome books. But ever wonder what actually goes on when the last school bell rings and Turbo is left to his own devices? After all, what do you think your class pets do all day? You think they sleep, eat, and wait for you to play with them? Well, think again, because Turbo isn?t just any hamster. He?s SUPER TURBO and he?s here to fight evil in and out of the classroom! Along with his superpet companions, Turbo battles everyday evils at Sunnyview Elementary, such as flying ninja squirrels, a gang of evil rats, giant Eraser Dude, and more!

In this first book, Turbo realizes that he?s not the only superpet in town (or in school). As he meets fellow superpets, such as Angelina the guinea pig (a.k.a. Wonder Pig) and Frank the rabbit (a.k.a. Boss Bunny), he also encounters a super VILLAIN: a rat who goes by the name of Whiskerface. Can Turbo and the Superpet Superhero League save the school from Whiskerface and his rat pack?