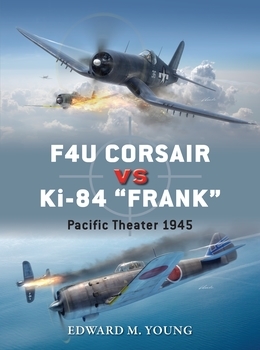 The Vought Corsair was the first American single-engined fighter to exceed 400 mph and establish dominance over the legendary Mitsubishi Type Zero-sen. The Ki-84 Hayate was introduced by the Japanese specifically to counter this growing American dominance of the skies over the Pacific. Built in greater numbers than any other late war Japanese fighter, nearly 3000 were completed between 1944 and 1945. This volume examines the clashes between the Corsair and Ki-84 in the closing stages of the war, revealing how Corsair pilots had to adapt their techniques and combat strategies to adapt to these newer types. It also reveals how the kill rate was largely driven by the reduced quality of fighter pilots after the high casualty rates inflicted on the Japanese air force during the air battles over the Solomon Islands.